The Scourge premiered in New York at the Origin First Irish Theatre Festival in The Irish Rep off Broadway in Jan/Feb of 2020.

Since the pandemic Michelle has continued writing and performing taking her new one-woman shows Divilskin and Pas Mon Singe to masked audiences. She was the Writer In Residence for Wexford County Council documenting the Covid Care Concerts and has written an Essay called Decades for publication.  She also wrote a short play called Boots which was performed as part of the One Voice Festival: Tales from the Quay in August 2021.

She is the writer and presenter of the mdm podcast on Spotify.

Michelle is currently writing her #NewYorkDiaries DiViLSKiN (part 2 )and the sequel to Scourged – Asylum.

She and filmmaker, Ted Moran, are currently editing SeeShell: six years of documentary footage capturing her live performances and a behind-the-scenes glimpse at the day-to-day life of a Scourge.

Listen here, subscribe on acast for the latest thoughts of a scourge. A meditation on life. 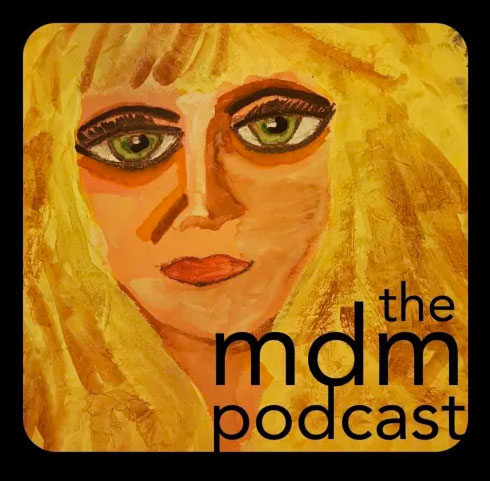 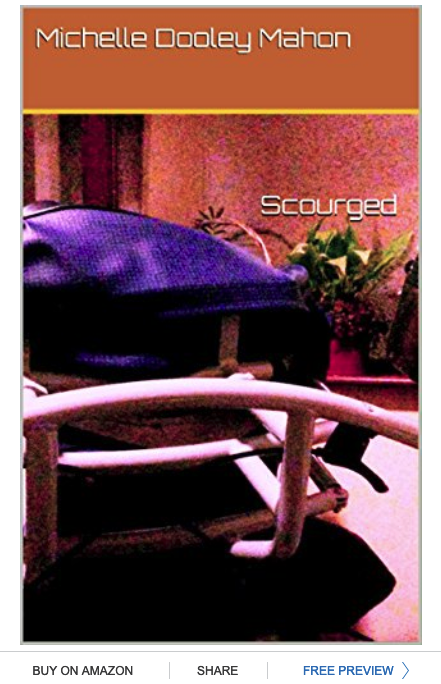 Michelle describes adapting the book for the stage as the hardest thing she has ever done. …….”writing “The Scourge” did what my Mother’s death could not, it silenced me, I sat for days staring at the flashing cursor , I needed an “In” ……… something the audience could see, something I could demonstrate the enormity of the scenes with and so I offered a prayer to my Mother, and all that was good in the Universe to help me and closed the laptop. And it was then as we were driving into Carlow town where Siobhán was born that I saw the small blonde head of Vonnie Dooley lying in the middle of the road.” A discarded naked doll with a bashed in face became the key to unlocking the beauty of The Scourge. She also named the doll “Vonnie” after Siobhán who was known as Nana Von by her Grandchildren. She has an alternate life now and is another introverted socialite with a Facebook page. Both of them are at their happiest alone with the dogs on a cliff.” 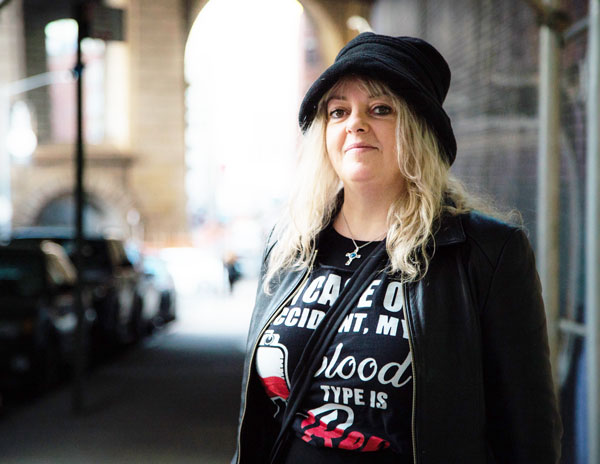 MDM is a writer, performer and host of the mdm podcast. She is the author of Scourged – a memoir about her beloved Mother, Siobhán and her decade long battle with Alzheimer’s. She is also the playwright and performer of its adaptation to stage The Scourge. The Scourge was commissioned for adaptation to the stage by Elizabeth Whyte (Director of Wexford Arts Centre) and was subsequently produced by her.  The piece was directed by Ben Barnes.

Following a spectacular debut at the Wexford Arts Centre, The Scourge returned by popular demand for a short run during Wexford Festival Fringe and then undertook a nationwide tour including Dublin Civic Theatre, An Gríanán in Donegal, Theatre Royal, Waterford, and Visual, Carlow as part of the First Fortnight International Theatre Festival in Jan. 2019. 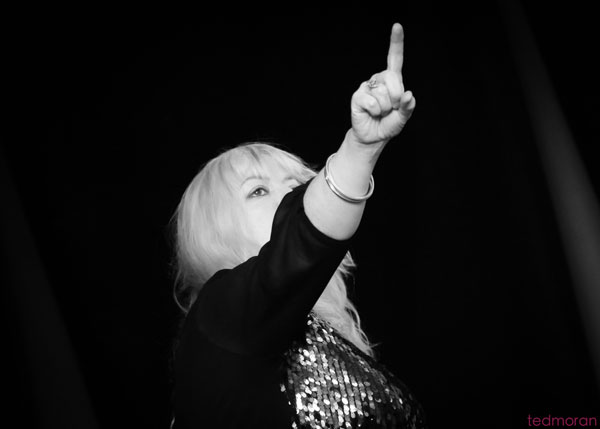 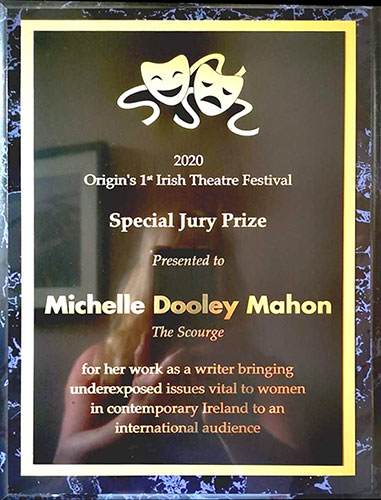 The Scourge opened as part of the Origins 1st Irish Theater Festival at The Irish Repertory Theater, New York in January 2020. She was nominated for Best Playwright and also Best Actor for her role as The Scourge. The production was also nominated for Best Design. She won the Special Jury Award for the writing from judges Cynthia Darlow, Harry Haun, Kate Shea Kennon and Sadhbh Walshe “For her work as a Writer bringing under-exposed issues vital to women in contemporary Ireland to an International audience”.

Michelle has performed in Ted Talks about Alzheimer’s and has been a key-note speaker for Carers featuring in multiple interviews and podcasts on RTE, Newstalk, Beat, KCLR, and South East Radio. She was awarded the Dylan Thomas Literary Residency in Sweden and has been a guest Author at the Write by The Sea Literary Festival in Kilmore, Co. Wexford.
MDM currently lives with her dogs in her hometown, Wexford. 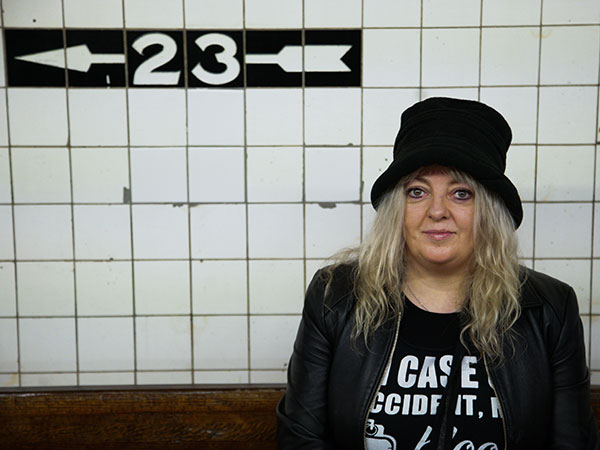 “… a cross between Joan Didion and David Sedaris, delving deep into the seam of the everyday, mining the ores of tragedy and comedy, shining a single headlamp as she digs,  until the unsuspecting reader, laughed out and cried out, is forced to go for a lie down.” – Eoin Colfer

“Scourged  is a beautiful read. A raw and honest insight into a life, an illness, and also the coping mechanisms used in the struggle with the  highs and lows of an exhausting creative mind. I cried buckets towards the end recognising my own bereavement and grief and found the words to be cathartic.” – Elizabeth Whyte (Director of Wexford Arts Centre)

“In Scourged MDM comes damn close to describing the ineffable , I felt swept up in the lyrical passionate prose, and truly touched by its heartbreak and wisdom.” – John Noerdlinger

“Dooley Mahon’s talent lies in conjuring up not only crystal-clear nostalgia and events but describing them in a way that drops the reader straight into the story. I could smell chips and clove rocks and roses. I was in that room with her.... a beautiful brave book”
Theresa O’Brien
“I read it in 2 sittings. My eyes hurt from laughing and crying. I’m going to read it again immediately … Inspirational!”
Jennifer Traupe
"A remarkable book filled with humour and savage honesty. I tried to ration it but instead became engrossed and, in a marathon-session, finished it. I am gobsmacked by it. It is truly beautiful, and inspirational"
Moya Finnegan
"From its beautifully honest opening  Scourged  takes me off in a time machine to a house I was in but a time I was not, I can see the cars, smell the cow shit, feel the honesty, pain, and frustration until suddenly here I go again – off  on another wild trip.  I have read it 3 times so far. Next week I will see something new in it.   Again.   It’s an interactive book. This is great work. In my book it’s 10 out of 10.”
James MacIntyre
“I read "Scourged" in Paris. I savoured it like chocolates I didn't want to finish. MDM's writing is from the soul. She was BORN to do this. Her description of having "no top layer of skin" is accurate as she is empathic and about as stable as a stick of gelignite. Incidentally, that is her power … This book is an absolute treasure, I have not read a book that was so “Real, loving & magical” in years. Michelle lays herself bare and the absolute love within the family simply radiates off the pages … Van Gogh painted "sunflowers" penniless and insane .... I believe the amazing "Scourged" to be the "sunflowers" of books!"
Jim Hickey
"I have not the authors use of words to describe this truly amazing book, it is brave beyond belief, and heartstoppingly beautiful, her candid description of her Mother’s death is almost a religious experience, this is a book that takes you on a journey and leaves you gasping, it is so layered it can be re-read endlessly, it made me laugh, it made me cry,  it made me remember"
John O’Connor 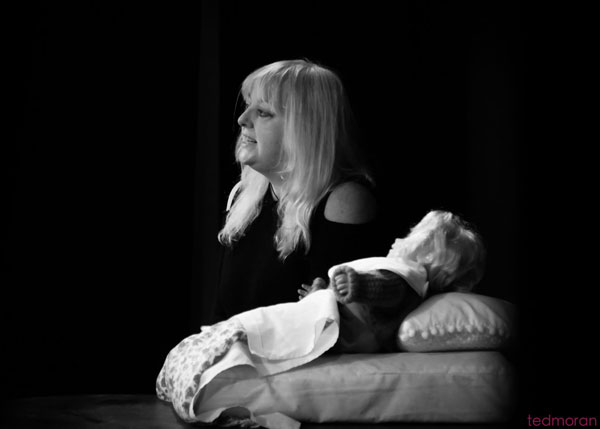 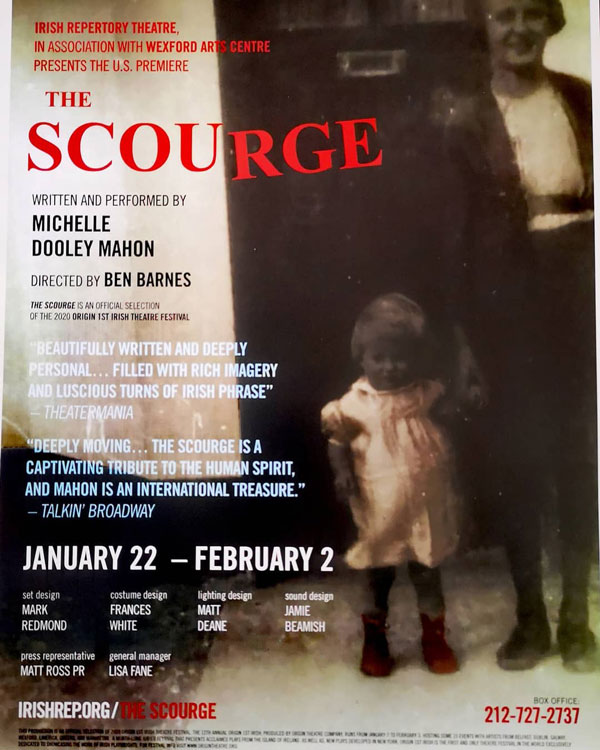 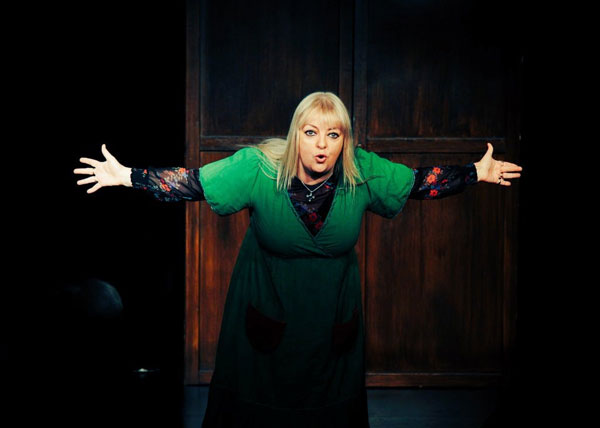 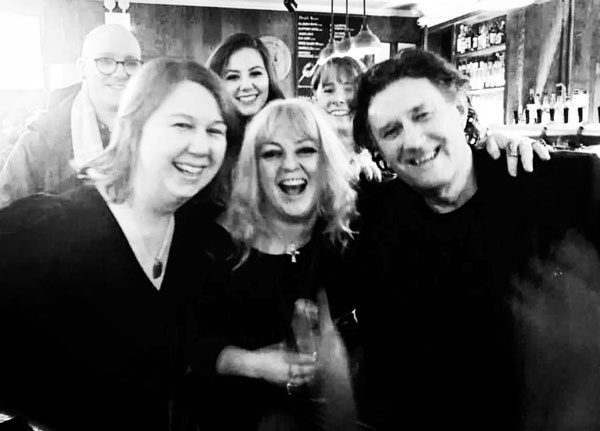 “A deeply moving testament to the power of emotional resilience, The Scourge is a captivating tribute to the human spirit, and Mahon is an international treasure.
The most common definition of scourge people will know today is “a person or thing that causes great trouble or suffering.” So, of course, in the context of Mahon’s story, Alzheimer’s disease is obviously, and very definitely, a scourge. The irony, however, is that throughout the piece Mahon refers to herself as a scourge. As her monologue unfolds, the reason for this becomes clear: Mahon is a troublemaker of the first order and doesn’t suffer fools gladly. Whip-smart with a sly sense of humor, she would be right at home at any dinner party and there’s no doubt she would know exactly what to do if you had a body of which you needed to dispose.
But Alzheimer’s disease and the slow, cruel loss of her beloved mother Siobhan, knocks Mahon down for the count and it takes years, seven years to be exact, for her to fight her way back to the human race. In the 85-minute The Scourge, her laser-like observations about the healthcare system, long-term disability facilities, and her families response to their mother’s illness have a biting poignancy which are distilled through Mahon’s own life-tested personality.
Simply directed by Ben Barnes, the former artistic director of the Abbey Theatre in Dublin, The Scourge and Mahon benefit tremendously from the intimacy of the Irish Rep’s W. Scott McLucas Studio space. Mahon’s voice seldom rises above a mezzo forte and she frequently delivers entire passages in a voice barely louder than a whisper. But she doesn’t need volume to make her point. It’s with her words that she heals herself and, by extension, she heals us too.” – David Hurst, Talkin‘ Broadway

“Each line of the play packs a powerful emotional and literary punch, and they collectively weave a tapestry depicting a woman of unstinting bravery in the face of her worst fears. The Scourge is also a raw but moving tribute to Ms. Mahon’s mother and her less than ideal life. It’s not always a pretty picture, but it’s a worthwhile ride and an authentic preview of what’s likely in store for most of us.” – Interludes  – Viewpoints on The Scourge

“Michelle Dooley Mahon is delightful, sad, funny, heroic and prophetic in a performance that moves and inspires us to be much more aware of the positives in grief.” – New York Irish Arts

“The Scourge is a rich stew of many parts and each morsel is a distinct flavor bursting with the kind of self-truth and self-reflection that is universal to life. Michelle’s telling of her tale makes a banquet of story and a buffet of observation so that you’ll leave the theater satiated and carrying a huge bag of leftovers that will feed you in some form the rest of your life.” – The Front Row Center

“The Scourge” is no less than a paean to her beloved mother, and the piece is rich with feeling, with a text that is often lyrical and even poetic. The striking looking Michelle Dooley Mahon strongly holds stage for the presentation.” – The Epoch Times

“I had to close my eyes to listen to the lilting cadences of the language” – Niall Cranny – Stage Director, An Gríanán Theatre

“… moved and almost overcome by the humanity, hilarity and heart rending of The Scourge … raised me up and plunged me down on an emotional rollercoaster.” –
Liam Murphy, Munster Express

“Mother Courage….a characteristic blend of wit and wicked powers of observation, and all delivered in a language that is at times quite poetic … a stimulating mix of a heart-aching sadness, anger, and despair, all tempered again by her indomitable humour…not just a magnificent local work but one that will resonate nationally and internationally too.” – Jackie Hayden, Arts review

“… hugely courageous performance. This is flesh and blood writing, sentient and animate, rooted in grief. And as Dooley Mahon knows only two well, grief has two acts: loss, followed by the remaking of a life.” – Tom Mooney, The Rest is Jazz blog, Arts Review

Get in touch, or leave us a message

If you wish to get in touch you can see our contact details below. Alternatively you can request a callback or send us a message using the contact form.